If you're a part of AWS Customer Council and were selected for a particular survey (I'm not positive which), then you may have noticed something interesting in your email inbox.

Last week, one of their survey reward emails looked like this: 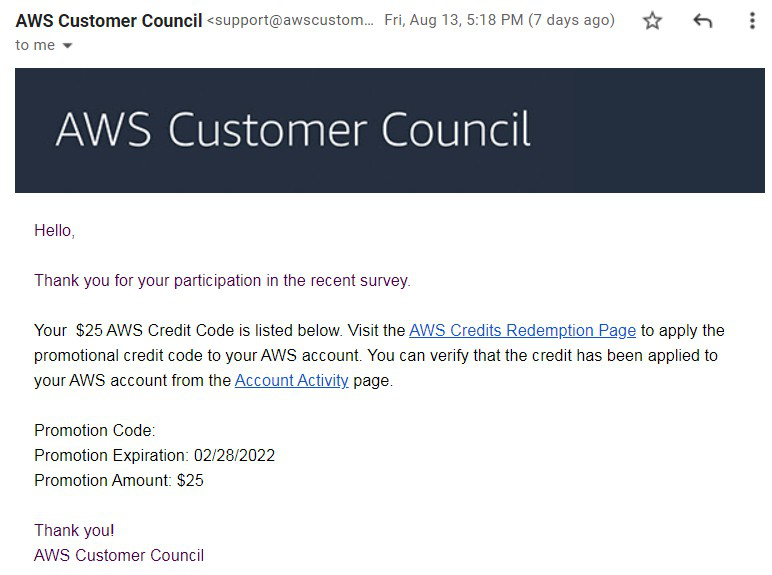 Notice how the promotional code, which should have a coupon code for the credit, is missing.

It's interesting that the ASCII version of the email, unlike the HTML version[1], has the un-replaced template variable:

I wonder what AI Screener means. Are they screening survey respondents for future surveys about an AI AWS project? Or, does this mean that the survey platform uses AI to screen users, somehow? Or perhaps AI doesn't stand for artificial intelligence, it stands for Amazon Insiders or something like that? I wonder if there's any other ways that the internal names of surveys can be leaked.

A week later, they sent out a correction, which, amusingly, also didn't have a coupon code: 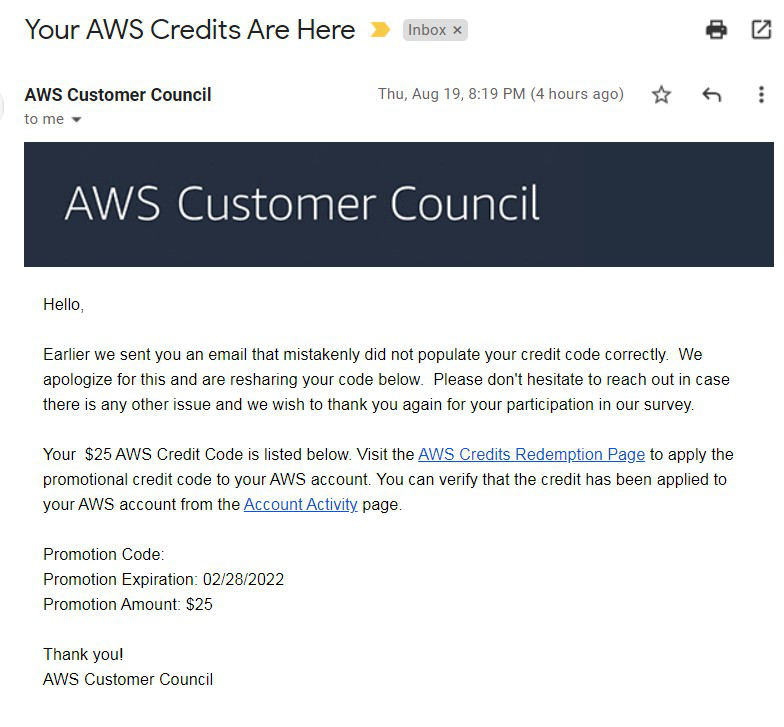 And then, the very next day, they sent out a second correction: 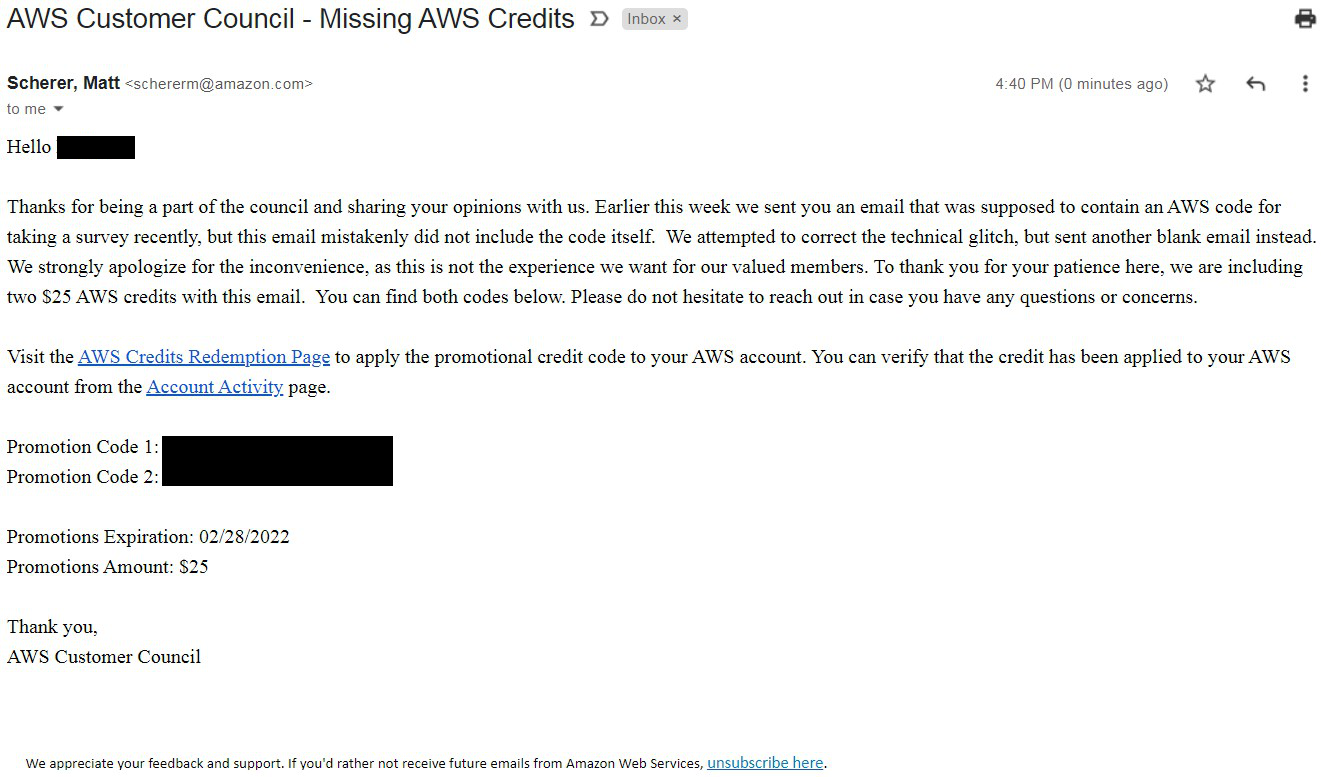 The last email seems like an email created outside whatever template system they use, because it's formatted differently. Or, maybe it was formatted differently as an intentional choice, to distance itself from the previous two emails and to implicitly communicate "this is out of band, we are actually sorry". Either way, seems good.

I'd like to commend AWS for how they handled this. Email templating mishaps are embarrassing because, even though your customers likely don't completely believe in the illusion that emails are hand-written to them by an engineer, it still shatters the illusion and makes customers explicitly consider, for a moment, the fact that that they're handled like a shepherd corrals sheep. Also, in general, when a very large corporation makes a mistake, and they go about identifying and highlighting it instead of burying it, especially when they directly apologize, it is always something that should be praised.

Anyhow, if you're someone who uses AWS, even if you're "small fish" like me (personal use, spending only $xx-$xxx per month), I'd recommend signing up for AWS Customer Council. Surveys are fun and it's nice to be heard, or at least, feel like you're being heard.

I'm still trying to get a feel for how often to write blog posts, how much revision each one needs, etc. I want to be entertaining, and I don't want to suddenly lose all motivation to write posts, but on the other hand, words are hard.

I'm working on a huge, technical-heavy and text-heavy post about Cloudflare that should come out in a few days. That one's actually being carefully revised, unlike this one, which I decided to post and then wrote and then posted all in a span of less than an hour. The reason, personally, I'm doing this is because I'm worried that worrying too much about the Cloudflare post will make me think of new posts as things that take a high startup cost to get started, which means I write them about fewer things, which I don't want. So, I'm indulging in a little bit of low-effort posting.

This post was also made to test including images in blog posts. Currently, I have a really questionable workflow - I have no admin UI for editing blog posts except in a code editor as markdown text (using node-supervisor to reload the site to preview stuff), and so to upload images, I have to manually name them and put them in a public (express.static'd) folder and then use markdown to link them, manually. Ick.

I'm also not thrilled with how the images look. Adding captions would be nice, and some images would not look good with 0.5rem of white padding before the border: 1px solid black. But, eh, I can fiddle with that later. Maybe I'll improve the workflow someday, too. Or, maybe I should switch to a more user-friendly blog platform, even though I spent a few days considering them already before even setting this up. I'm not sure.